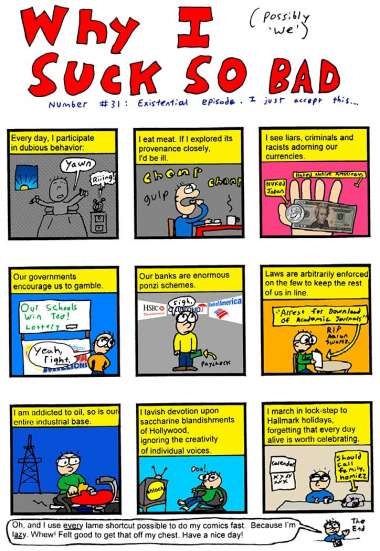 I think I'm running out of individual behavior to criticize in this series.
http://www.delicious.com/comicslifestyle/comixfail
(Hmm...I could do a comic about how I sleep late way too much.)

This strip came out of the frustration I feel: that some days, everything I interact with is flawed -- and I'm doing nothing to address it.

Panel Two: I was a Vegetarian for a year. Check out the Meatrix for some simple facts about industrial meat production. Overall, I should cut down.

Panel Three: most historians point to the invasion of Manchuria by the USSR, not the USA bombing Japan, as ending World War Two. Was using the A-Bomb really necessary? Andrew Jackson: just look him up on Wikipedia. Most currencies honor politicians, and I have a lot of skepticism towards political mandarins.

Panel Four: Government sanctioned gambling: 'Our Schools Win Too!' said California. Morally, what does it say that the government institutionalizes this? Also not very keen on what Melbourne's Crown Casino and Singapore are doing, either.

Panel Five: Hong Kong Shanghai Bank, CitiGroup, Bank of America: too big to fail. I'm one of many who are tacitly complicit, I've used their services. We need to approach them from a perspective of shareholder transparency, and possibly anti-trust. I don't think the USA's financial system has changed enough to weather another market plunge. Too many of the same people are in power, virtually no one has gone to jail.

Panel Six: Aaron Swartz was downloading academic journal articles and was very clearly going to be made and example of. He wrote the afterword to the book I'm reading now, Homeland.

Panel Seven: After reading "Don't Tell Mum I Work On the Rigs" it was never clearer to me about how we're all addicted to oil and it's not going to change soon. It really should.

Panel Eight: I know a surprising number of independent musicians, cartoonists, creators but I'm still sucked in by mass media TV, music, movies. I should reserve more time and attention for them. But no, I watch manipulative crap like a fake high school memoir by the screenwriter from 'Rent', stamped for approval by MTV.

Panel Nine: And I suck at remembering birthdays. I really need to calendarize them better. For kids especially, it's *such* a big deal. 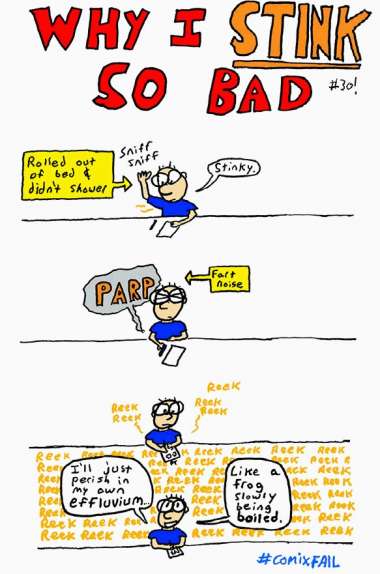 Aha! One or two remaining tidbits of suckage to exorcise...
http://en.wikipedia.org/wiki/Boiling_frog

Oh, and have you gotten your free copy of QuickDraw #6 yet?
http://blog.comicslifestyle.com/2012/12/free-comics-friday-quickdraw-6/ 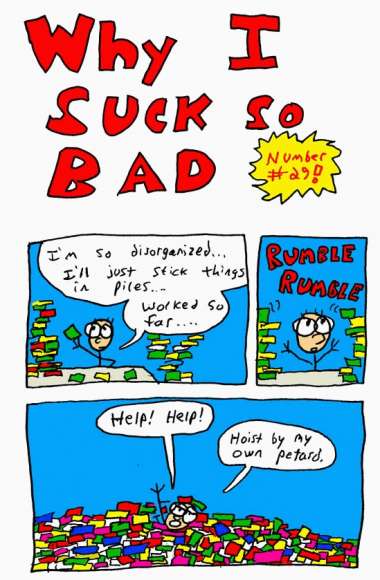 Clutter in my home, office, computer, life seems to be reaching epic levels.

More in the series (collect them all!): http://www.delicious.com/comicslifestyle/comixfail