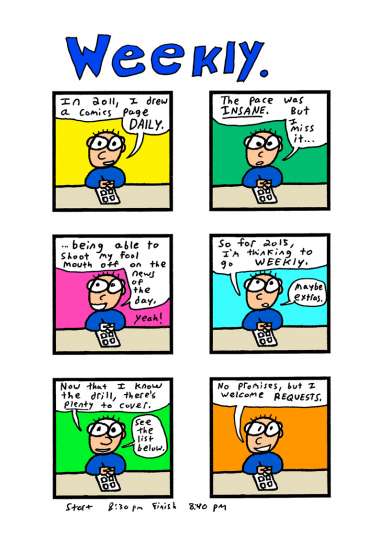 Comics are words and pictures. And so is the internet, TV and your smartphone. You may not have realized it, but you are living in a comic strip world. We all are.

In 2010 I published QuickDraw #6 and began thinking "Is that all there is? How long before I do another print comic? Or comic of any sort?" I'd been doing comics online since 2003, but rarely to any sort of schedule. So I decided it was time to get off my arse and do a proper daily web comic.

It's a wonderful feeling to wake up and think, 'What Do I Want To Draw Today?' And that was my life, in 2011, when I committed to a year of drawing 'a page a day'.

When I was drawing 'a-comic-a-day', it was fun and pretty crazy. It decimated my social life and free time, but was immensely gratifying.

I decided that I'd aim hard for daily, but not so far as it would jeopardize my day job and (relative) sanity.

Naturally, once you make a commitment, all kinds of temptations pop up to challenge it. As the year wound on, I found myself getting deeply involved in work related to human rights and transparency. The daily offerings became shorter and more perfunctory. I met my goal, and also learned a bit about priorities. I don't lose any sleep over my choices.

I've continued with sporadic cartoons since 2011, I miss shooting my fool mouth off. So I'm gonna get back in the saddle in 2015.

Common sense suggests that I slow it down a notch. I will post weekly, which may allow me a higher degree of quality control. (If you're lucky, I may post more frequently than that.) I've always had a 'day job' and am very fortunate to actually like what I do.

Content: On occasion I'll alternate sketches in the place of comics, to build up my skills. (Some days I have no words.) I live in Cambodia and while I'm glued to global issues, I want to keep my feet planted in the context of where I live.

Based on lessons from last time, I am also going to build up some infrastructure. (A 1-2 week buffer of comics, automated use of social media, lining up technical help for 'post production' and research partners for decent content. Some comics will be longer than one page, so I'll need to plan ahead for those.)
I also hope to experiment and play a bit with automated drawing programs, and partner up with friends in film, music and other media (when appropriate) to keep things fresh.

I should note that I will also be open to REQUESTS.

Below are some of the topics I'd like to write about. I can't guarantee I'll address your topic but I am open to suggestion, and I'll put all on a list.

Oh, and truth in advertising: don't expect too much.
QuickDraw is ALWAYS going to be fast and dirty.