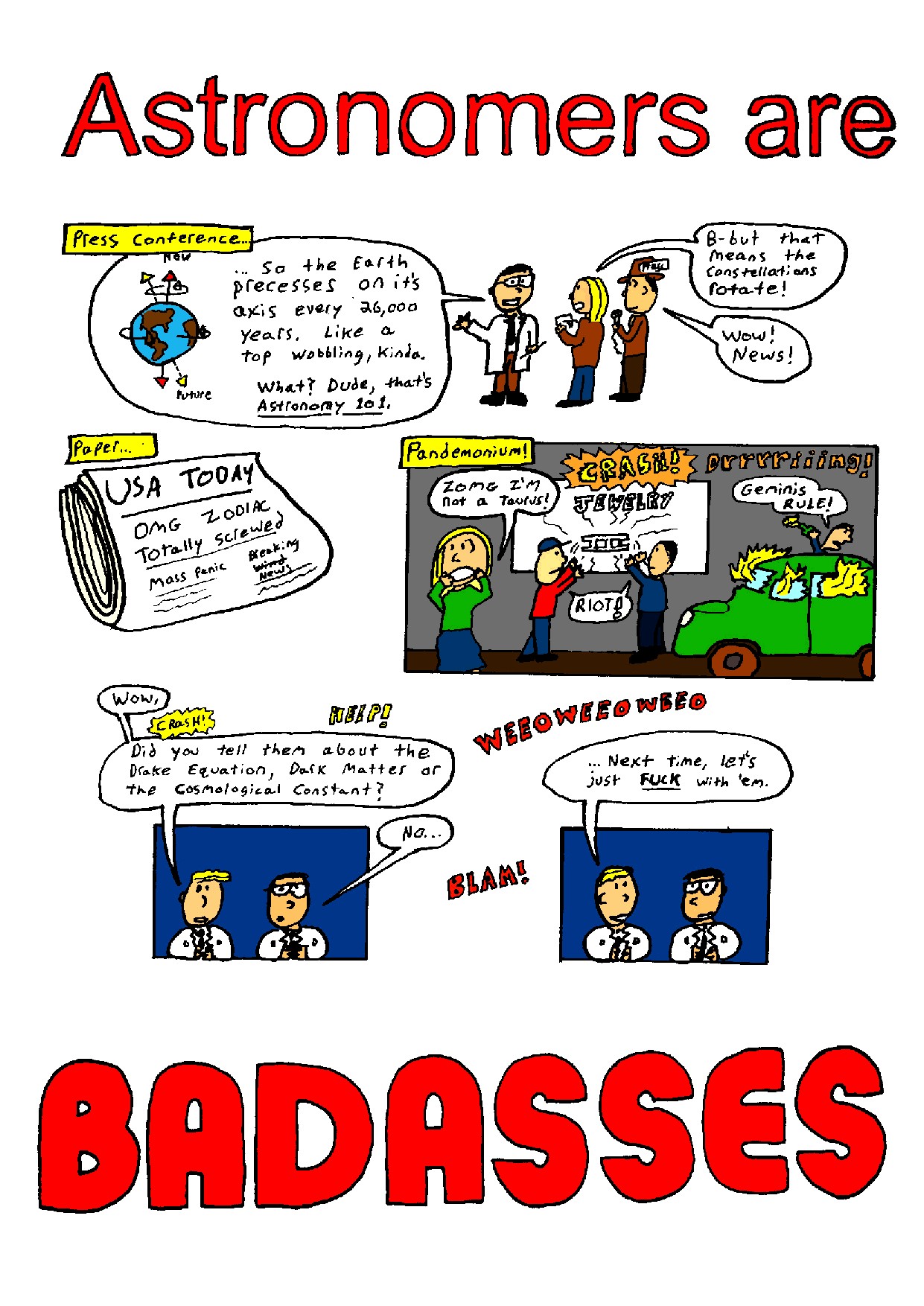 The basic premise of the comic: if one teensy elemental astronomical fact can send most of the world into a tizzy, we'd probably have complete societal breakdown if people had a grasp on even bigger issues such as extraterrestrial life (The Drake Equation) the composition of the universe (Dark Matter), or its eventual fate (The Cosmological Constant). Man, those Astronomers are some hardass troublemakers. Don't mess with them.

If you are new to the story above, try reading THIS article first.

Really, all this nonsense about the zodiac changing due to Earth's axial procession is old hat. SERIOUSLY old. It was well known around the time of Hipparchus - 2nd century BC. The world's first (known) analog computer - The Antikythera Mechanism - operates using his system.

Big shout out to inspirations Randall Munroe (XKCD) and Jennifer McCreight (BlagHag) for their skillful deployment of both science and skepticism.

And I would be wrong not to namecheck BadAss(tronomer) Phil Plait as well for being WAY ahead of the game, read his page debunking Astrology as a science.

If you are really upset and want to stick with your star sign, here is one explanation of how existing Western astrology is based on (ahem) seasons, not actual star positions. (Backpedaling much?)

My opinions on Astrology?

I think (in the West) it's a cultural phenomenon, that is self-reinforcing like any belief system with lots of users interacting. Anyone who tries to pigeonhole me by my star sign would probably be better off using something like the Myers-Briggs test, which also involves archetypes yet has a much more demonstrable system of metrics. (Far from perfect, though.)
(Asian astrology is far more complex - here in Cambodia, Indian and Chinese systems overlap!)

My Dad (rocket scientist) encouraged my enthusiasm for physics and astronomy when I was Junior High & High School. (I am gonna hold off on dedicating a comic until there's one without naughty words so he can share it with his friends.)

As a result of my upbringing, I am the WORST EVAR person to see a science fiction movie with. You have been *warned*.

I will be adding to THIS list o' links related to the Astrological Aberration as long as the mood strikes me. http://www.delicious.com/slugdog/zodiaccomic

Comic drawn/inked/colored from 11:20am to 4:10 pm Saturday Jan 15th. (Click for larger size.) Ordinarily I'd go for some flat computer color but I just wanted to get it up and out fast.  May recolor during the week. (Done.)  Hmm, and it may be time to consider making some t-shirts.